More than 400 project leaders and change management practitioners representing organizations from 59 countries share lessons learned and key success factors in Prosci's 2007 Best Practices in Change Management benchmarking report. This release marks Prosci's 10th anniversary for change management research and 5th longitudinal study. The 70 page report is full of useful tips and findings that you can put to use immediately. This special tutorial series provides glimpses into the data and analysis from the 2007 report.

Participants cited four top reasons for resistance to change by employees, including:

Participants highlighted five top reasons for resistance to change from managers, including:

Participants were asked to identify what resistance to change looked like. The top responses were:

Ineffective methods for dealing with resistance

Prosci's research and methodology suggest that there are steps that can be taken to proactively manage resistance, before it significantly impacts a project. Additionally, there are specific actions that can be taken to address resistance when it does surface. In addition to the complete data on the topics addressed above, the 2007 benchmarking study includes sections on:

The full report includes complete descriptions of the top reasons for resistance presented in this tutorial. 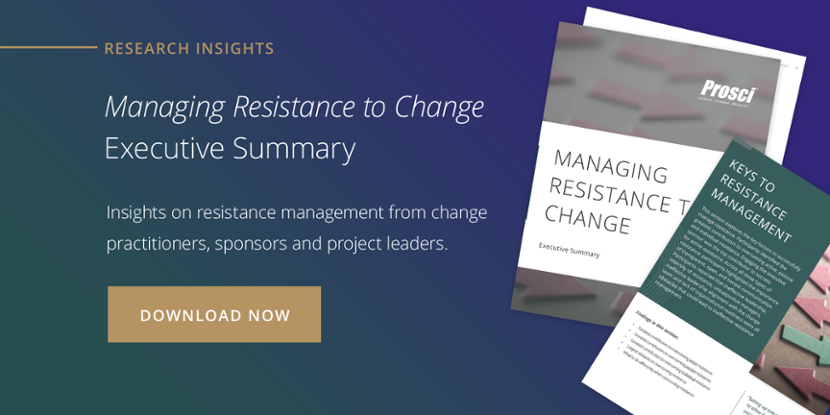