How to Reinforce Change by Celebrating Successes

Reinforcement is more than checking a box that a change was done. There are three clear steps to reinforcing a change:

2.  Celebrate Successes and Reinforce the Change

In this step, you will be identifying and celebrating successes on the project. Use these celebrations and public acknowledgement to reinforce the change. Constantly seek evidence of major milestones and identify early successes even if small. Here are some hints to create successful celebrations:

For low-cost celebration ideas, get your team together and brainstorm. You will be surprised at the low cost, creative ideas your team comes up with and how well those ideas are received.

Celebrating successes not only increases morale but it builds support among those that may need to "see it to believe it."

3.  Transfer Ownership of the Change

At some point in the project, the change management team will dissolve and the operational managers will take over. For small projects this is a minor transition. For large projects, the steering committee is involved and the transition requires careful management.

Discussions and interviews with the primary sponsor and the steering committee should be held to:

The primary sponsor or steering committee will ultimately make the transition decision based on how well the project is doing and what further responsibilities they envision for the change management team.

The goal of after-action reviews

An after-action review is a post-project analysis of what worked and what did not. This analysis results in lessons-learned for the next project. Learn from your mistakes and from your successes. Begin to build change management competency into the organization.

Keep in mind that the after-action review has several sources of information besides the change management team, including:

Input from each of these groups should be considered when evaluating your overall performance. The outcome of this activity should be documented lessons-learned and changes to the change management process for the next project.

With this final step of Phase Three of the Prosci Three-Phase Process, you are officially ready to move on to the next change. 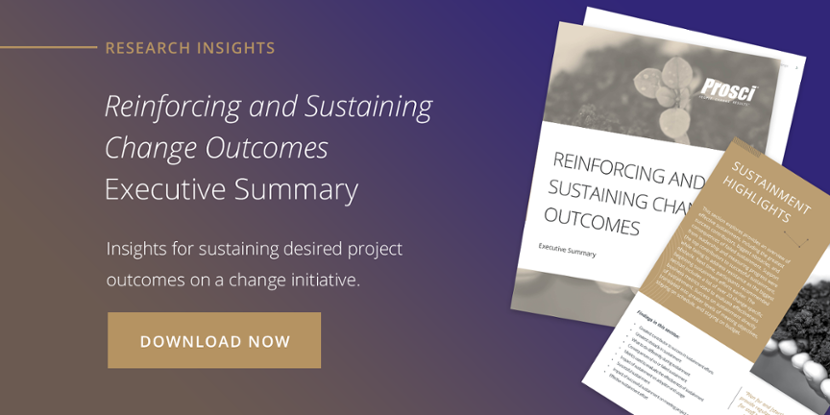