You might think that overcoming resistance to change with managers and supervisors is one of your most important challenges during change. The first two findings from the 2007 Best Practices in Change Management benchmarking report actually support this assumption:

But that is not the end of the story. Overcoming resistance from managers is just the beginning of a blueprint for successful change. Take a look at the next four research results:

These last four findings cause us to take a step back and consider how effectively we've engaged managers as leaders of change. Managers are one of the most important allies in making projects and initiatives come to life. They interact constantly with the employees whose day-to-day work is impacted by the particular solution, and their role is crucial when it comes time for the change to be adopted throughout the organization - i.e. when benefits are actually realized.

Role of managers in times of change

The 2007 benchmarking study also looked deeper into the role of managers in times of change. Participants were asked to identify the most critical roles managers and supervisors should play when changes are being introduced into the organization. The top five responses were:

Through their words and their actions, managers can mobilize employees around a change to how they do work - improving the level and speed of adoption. Or, conversely, they can be a significant barrier and impediment to your change.

Prosci's new Change Management Process for Managers and Supervisors tackles this problem head on. A manager who is resistant to a change cannot effectively lead their people through that change. This seemingly simple observation has tremendous impact and consequences when overlooked in organizations. In fact, it is often overlooked as project teams get caught up in the technical activities of designing and installing a solution.

The degree to which you are able to engage managers and supervisors is directly tied to the benefits your project will deliver to the organization. Prosci's new Change Management Process for Managers and Supervisors (shown below) is a research-based approach to mobilizing this critical group. By following the process, you will be able to effectively: 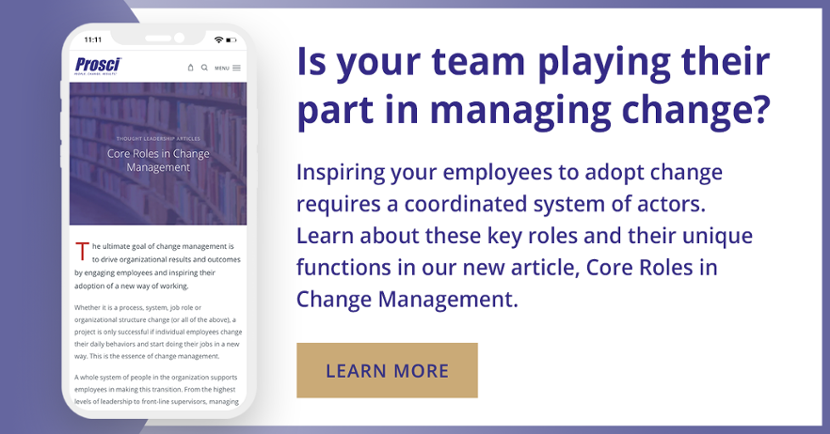